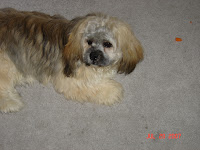 I’m the youngest of two kids, and my mom always told me that I was so high maintenance that if I was born first, she probably wouldn’t have had a second child. I’m starting to feel that way with my puppies. Our first dog, Rocco, was a breeze to housetrain. He picked up on things fast and had very few accidents in the house. Unfortunately, this isn’t the case with Kelso.

I think the main reason is that Rocco was only 4 months old when we got him. He went from the Breeder, to a store, to our home. He hadn’t developed many bad habits yet and caught on right away with our dog litter box training methods.

Kelso, however, has had a different life. He’s 7 months old, and has gone from breeder, to pet store, to his first home (where he was somewhat neglected), to a second home (where he wasn’t compatible with the other pets) and finally to our home. Along his travels, I’m sure he was housetrained a different way in each home. He’s a confused little pup and he doesn’t know what is OK. He has this habit of only doing “his business” on the rug when no one is looking, which leads me to believe he was punished in some way for going on the rug, which is why he basically tries to hide when he has to “go.”

Over the last week, he has shown some improvements. He’s getting more comfortable living in our home, but still has his share of accidents. The most frustrating thing is that he really doesn’t signal before he has to go. With our first dog, Rocco, there is a whole routine he goes through when he needs to relieve himself. He runs wild, sniffs, and circles. Plenty of time for us to know his intentions. Plenty of time during training where we could bring him to where it was OK to “get busy.” Kelso, on the other hand, just stops and “flops.” No barking, no running, no sniffing, no circling. No advance notice.

However frustrating it has been, he’s come a long way in the last week and starting to run over to the litter box on his own first thing in the morning. The evening, on the hand, is a totally different story. So, we just take a deep breath, get out the stain remover and the carpet steamer, and clean the mess. Just part of the housetraining blues.

Trackposted to Outside the Beltway, Pirate's Cove, Stuck On Stupid, The Random Yak, Allie Is Wired, and Big Dog's Weblog, thanks to Linkfest Haven Deluxe.
dogs, housebreaking,
Posted by Matt

It's karma, Matt, for your being high maintenance.:-)

Continue to be patient. He's learned some things that need to be unlearned.

When things go wrong during housebreaking, don't let your home go stinky and dirty. As a dog owner myself, it took a while for my puppy to be housebroken. Meanwhile, my house smelled horrible and had stains. I called Citrus Fresh and had my carpets and pet odors removed from my furniture and carpet. Definately recommend having a carpet cleaner handy and make a few visits during the housebreaking period. here's their web site http://www.citrusfresh.com

I agree with Jan here...there are several things pets learn that do take considerable time to get rid of...keep at it....

We are in the same boat of whether to get our second dog. We have had our first for the last 14 years and not sure we could take more than one. But we certainly learned a lot over the past 14 years - so much so we created a site Havanese Training to help others.

I love animals. Thanks for all the great info.

There are definitely a number of particulars like that to take into consideration. That may be a nice level to bring up. I offer the ideas above as common inspiration but clearly there are questions just like the one you deliver up the place a very powerful factor might be working in honest good faith. I don?t know if greatest practices have emerged around things like that, however I am positive that your job is clearly identified as a good game. Each girls and boys really feel the impression of just a moment's pleasure, for the remainder of their lives.

I searched for a adorable bikini for this spring time and there is a web site I discovered that markets cheap bikinis that are a little revealing but are still modest.