"If there are no dogs in Heaven, then when I die I want to go where they went." Will Rogers

"The average dog is a nicer person than the average person." Andy Rooney

"If you pick up a starving dog and make him prosperous, he will not bite you; that is the principal difference between a dog and a man." Mark Twain

"There is no psychiatrist in the world like a puppy licking your face." Ben Williams

"Don't accept your dog's admiration as conclusive evidence that you are wonderful." Ann Landers
Posted by Matt 103 comments: Links to this post

How to Pick a Good Dog Food

There is an ongoing debate about the inclusion of corn in dog foodformulas. It has generally been agreed that corn is often used as acheap filler ingredient in many dog food formulas. Indeed, many dogsseem to develop allergic reactions to corn-based dog food formulasover time. The danger of corn often comes from when it is used as theprimary source of protein in a dog food formula. When corn is listedamong the first five ingredients, it is making up a significant bulkof the food. Corn has a lack of bioavailability to your dog, and maycause digestive problems. In general, a dog food formula that containscorn will be inexpensive, and your dog may need to eat more of theformula to feel “full”.

The First Five Ingredients
To gain a basic understanding of a dog food formula’s quality, you canuse the first five ingredients as a guide. As a general rule, thefirst five ingredients of a dog food formula make up the “bulk” of theformula. If you’re in the grocery store shopping for dog food, you canlearn a lot about a formula from reading the first five ingredients.For example, the first ingredient in a dog food formula should ideally be meat meal. If simply meat is listed as the first ingredient, it isusually mostly water. It takes five pounds of meat to make one poundof meat meal. This means that meat meal is usually more nutritionallydense. The only catch is that some companies use meat meal that is oflow quality. Some meat meals have animal parts ground down and mixedin to the meal, in order to ‘bulk’ it up for the formula. If possible,you should always check with the company about the quality of theirmeat meal. Ask where it is made, if they purchase their meal fromforeign countries (which may not be as strict in their healthregulations), and what the ingredients are. You may also want to ask which parts of the animal are used in making the meat meal.

Protein is the foundation of your dog’s diet, and should make up atleast two of the first five ingredients. Always avoid formulas that list a grain as the first ingredient, since this means that the formula is primarily grain-based. It’s usually best to steer away fromdiets that use an excessive amount of carbohydrates. Also avoid any formulas that use artificial preservatives, such as BHA or BHT. It’salso best to stay away from dog food that is artificially colored.

Toxic Ingredients for Dogs
There are several ingredients that have proven to be toxic for dogs.The two most notable ingredients (that are sometimes contained in somedog food formulas) are garlic and onions. Garlic and onions bothcontain a toxin that may lead to the breakdown of red blood cells in adog’s body. These toxins are more prevelant in onions than in garlic.Some dog food formulas contain a small amount of garlic seasoning,garlic oil or garlic powder. If this ingredient is among the first fewingredients, it’s best to avoid feeding this formula to your dog. It’s also very important to keep your dog on a diet that is properlybalanced in fats. Dogs may be prone to developing pancreatitis whenfed a high-fat diet over time (or from having just one high-fat meal).Monitor the fat content of the treats and food that you feed your dog.The guaranteed analysis usually shouldn’t have more than 20% fat,except if your dog has specific veterinary needs.

For more information on Dog Food you can visit:
Dog Food Reviews
Posted by Matt 4 comments: Links to this post

Article from zootoo about how these bunnies are helping children with their own disabilities.
Posted by Matt 5 comments: Links to this post

Check out this link for a good article about how dogs have helped in medical advances
Posted by Matt 7 comments: Links to this post

There is a lot of great information out there about pets, and I'm always looking for other voices to share their knowledge on this site. If you want to contribute and article about anything pets, just let me know. Send an email to mattfm77@hotmail.com. I'll review and post the article and all I ask is for a link back to the article in return. It can be something already posted or something completely new...it's up to you!
Posted by Matt 12 comments: Links to this post 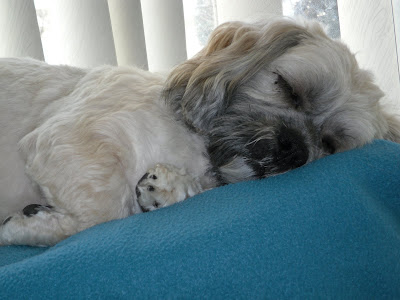 Dogs understand growls, even if we don't

One dog growl may sound like another to human ears, but a new study shows for the first time that dogs receive specific information in growls that conveys meanings like "get away from my bone" or "back off."

The study, accepted for publication in the journal Animal Behavior, presents the first experimental indication that domestic dogs rely on context-dependent signals when they growl at each other.

The findings add to the growing body of evidence that animal calls are far more complex than previously thought. For example, prior research suggests chimpanzees communicate information about food quality, while birds, prairie dogs, chickens, squirrels, primates and other animals likely share information about predator types.
Of all of these sounds, dog growls are particularly intense.

"A growl is a short-distance warning, not like a bark or howl, which you can hear over a large distance," co-author Peter Pongracz told Discovery News. "When a dog growls, the opponent is near, so he/she can hear clearly that the next few steps forward will not be greeted with a warm welcome."

"The other common usage of growls is during play," added Pongracz, a behavioral biologist at Eotvos Lorand University. "This can be explained by the fact that dogs very often play 'martially' — they wrestle, chase, play tug of war — so these actions and visual displays are accompanied with martial sounds too."

For the first part of the study, Pongracz and his colleagues recorded 20 adult dogs of various breeds growling during the following situations: when a threatening stranger approached, during a tug-of-war game and while guarding a large, meaty bone.

The scientists electronically analyzed the recorded sounds and found that play growls stand out from the other two types because they are, in part, shorter and higher pitched. The computer analysis didn't show any major differences between the other two growls, but dogs picked out the specific meanings immediately during the second part of the study.

For this experiment, 41 adult pet dogs of various breeds were recruited from the databases of the Clever Dog Lab in Vienna and the Family Dog Project in Budapest. The researchers placed a freshly cooked, meaty and juicy large calf bone in a bowl. All of the study dogs found the bone irresistible.

But as the test subject dogs approached the bone, the researchers played back the previously recorded growls through a hidden speaker. The hungry canines only jumped when the bone-guarding growl was played, even though the threatening stranger-associated growl sounded just as menacing to human ears.

While it remains unclear how dogs communicate such precise information, Pongracz said one possibility is that dogs are very sensitive to the emotions of other canines.

"One could argue that a dog faced with a threatening stranger is more 'afraid,' for example, while the dog that is defending his/her bone from another dog is more 'aggressive,'" Pongracz explained, but he hopes future analysis of dog growls will reveal more about how these sounds are structured.
Daniel Mills, a professor of veterinary behavioral medicine at the University of Lincoln, said the study adds to a "growing recognition of the greater complexity of vocalization by dogs."

"I believe that some of the unanswered questions about assessing how vocalization relates to the inner emotional states of dogs will be addressed and, with this knowledge, we will gain much greater insight into the inner lives of dogs and other species," Mills added. "Hopefully this will also lead to a greater appreciation of, and respect for, non-human animals in general."
Posted by Matt 54 comments: Links to this post

About two weeks before Christmas, Deacon, an 85-pound German shepherd, went missing from his family home in rural Stuart, Va.
During the first couple of days, Pamela Holt, her husband Keith, and their daughter Brooklyn, 3, weren't terribly worried because they figured their nearly 2-year-old pet was running in the fields behind their home.

"We have a lot of land and thought Deacon might be enjoying the outdoors," Holt, who works as a teller for SunTrust bank, tells PEOPLEPets.com. "But we soon got worried and called the area dog warden, the pound and the sheriff's office. After two weeks, we gave up, fearing he had died or was stolen."
Deacon, a gift from Holt to her husband Keith, a teacher and football coach, had become a beloved family member, and everyone was upset. But a curious call in late February from a man in Deland, Fla., changed everything.

"A male voice on the other end said he thought he may have Deacon," Holt tells PEOPLEPets.com. "I was angry at first and thought he was a prankster trying to play a joke on us ... I nearly hung up on him."
The man, who said he was from Animal Control in Deland, told Holt he was looking at her dog. Holt said she thought Deacon was dead. But when he asked her if the dog's name was Bruno, Holt went crazy with joy.
"I was speechless," she says. "The dog was originally called Bruno when he was micro chipped, so I knew this was not a hoax. When the man emailed me a picture, and I knew it was Deacon, I called my husband. We were so thrilled that we drove 10 hours to Florida to pick him up."

The Holts believe Deacon was stolen by people who had hoped to breed him, but they were unaware that he had been fixed so it was a waste of time. And somehow, the dog ended up in the Sunshine State for the holidays.

"Deacon was in a pen with another dog when he saw us," Holt recalls. "He trampled the poor thing to get to us. He ran to my husband and jumped on him. He was so excited."

The following day, when they got back to Virginia after the 600 mile drive, Deacon ran directly over to the outside window of Brooklyn's bedroom, hoping to see her.

"He cried and cried until she got home," Holt says. "Once he saw her, he was so happy!"

Even though there is no leash law in their area, the family has vowed to tie their dog in the yard so nothing ever happens again.

"We are blessed to have Deacon back," Holt says. "And will do what we must to keep him safe and sound."